The walking route 'Molse Meren' has acquired a great new highlight. A new footpath has been opened to the general public over one of the hills of nature reserve 't Oud Stort. 'At the top of the hill, you feel as if you're in Scotland', says Jef Sas, conservationist and nature guide of the organisation Natuurpunt. 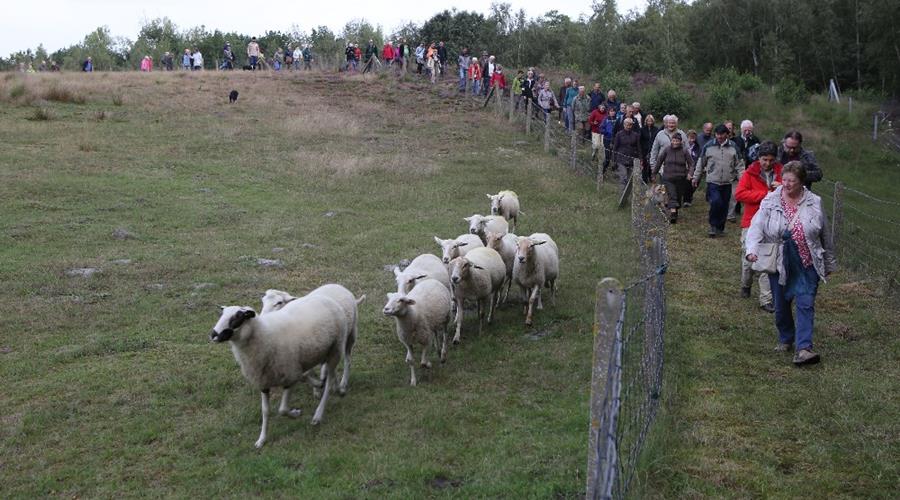 A taste of Scotland in Mol
The undulating heath area between the Zilvermeerlaan and the Postelsesteenweg used to be the municipal landfill site. In 1985, when a different solution was found for household rubbish disposal, the site was covered by a thick layer of sand and clay. Local Jef Sas says that he remembers the time before the landfill site. It was a lignite pit, quarried during World War II. Then it was turned into a landfill site, far away from the houses but easily reached.
In Scotland
The lorries no longer come and go and nature was allowed to take its course. In fact, the hills consist of household rubbish. But thanks to the thick covering of clay and sand, we have been able to turn it back into a beautiful stretch of Kempen heather. The hills give the walker the impression of being in Scotland.

Footpath
Some time ago, a footpath was constructed over one of the hills, fenced off on both sides by a wire fence to separate walkers from the sheep which used to graze here until recently. The footpath has been there for some time, but now it has been opened to the general public. The herd of Kempen heather sheep is no longer a feature of the heath. We now use a system of managed grazing with a herd of sheep from non-profit organisation Kemp. Under this system a large herd of sheep will intensively graze one particular fenced-off area, in this case containing a large number of birch wild shoots. The sheep are used to remove the grasses and shoots of birch in between the heather plants by grazing. This means the heather is able to thrive. Open heathland offers the ideal nesting conditions for the skylark and the curlew. From mid-July to mid-September the heather flowers with stunning purple colours, making this the perfect time to enjoy the short 500 m footpath.

Where is the new footpath?
The footpath is not very easy to find. Follow the arrows. Walk along the cycle path next to the Postelsesteenweg. You will come across a sheephouse in the nature reserve. That is the start of the footpath, which cuts off a corner of the area, known as 't Oud Stort, across one of the hills. The top of the hill affords a great view.

The footpath is part of the 3 km Molse Meren route around the Stortplas lake and nature reserve 't Oud Stort. Depart from the Ecocentrum de Goren, Postelsesteenweg 71.

During World War II, from 1940 until 1944, the site was used for mechanised lignite mining and the local population too used the site to collect lignite. Lignite was used as an alternative type of fuel during World War II because coal was scarce. The quarrying was done randomly, causing the formation of shallow pits. After the war it was left as a kind of moon landscape, with water filling up the shallow pits.

At the end of 1958, the pits were taken into use as a landfill site for household rubbish and they gradually became filled up. In 1984 the pits were no longer recognisable and the site was covered by rubbish heaps. During the eighties, driven by growing environmental concerns, landfill sites were closed all over the country. In this period, too, the first recycling centres were established, where rubbish is sorted.
Once the landfill site was closed, it was decided to cover it with a layer of sand and clay. This work was completed in 1989. At the end of eighties, heather clippings from Limburg were sown on the site, resulting in a brand new nature reserve.