The extensive heather areas of the Kempen were created by man and his animals. The largest acreage of heather was achieved in the 18th and 19th century. This probably covered around two thirds of the entire region. And the Kempen agricultural economy had become dependent on the heather. Sheep grazed on the heather and thus ensured its survival. They supplied the smallholders on the heather with skins, milk, meat and wool. An important contributor was the manure they produced. 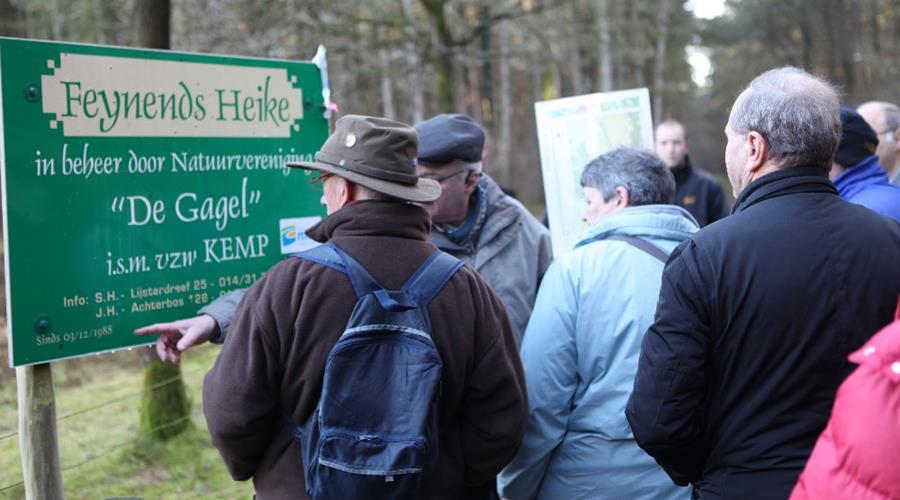 The manure was stored with the cut heather clods in the deep litter house. This provided some manure in springtime to add the necessary minerals to the arid fields. The demand for home-produced wool fell, the canals were built, bringing mineral rich waters, and the railways and other roads were built, which put pressure on the heath areas. The final death blow to the heath area was the discovery of the Kempen coal deposits in 1901. This created a huge demand for mining timber. Thousands of acres of heather were planted with fir trees. Other heath areas were taken into cultivation or factories and recreational areas were built on to them.

In the woods between Oude Bleken in Millegem and Gooreersels in Achterbos there was a small stretch of wooded heather left. In 1988 several members of the conservation group De Gagel took the initiative to restore this last bit of heather to its old glory. Every year in winter they worked hard. Sawing, logging, cutting, mowing... At one point the special Kempen sheep of non-profit organisation Kemp were deployed to achieve the desired result by grazing the heather. In 2013, after 25 years of heavy labour, the moment had come: the inhabitants of Gagel could boast a beautiful stretch of purple in amongst the green of the pine forests.